Mountains to Visit in Israel from North to South > Abraham Home

Mountains to Visit in Israel from North to South

With plenty of mountains sprawling across Israel—over one thousand, in case you’re wondering—there’s quite the pick of the bunch to visit during your time in Israel. No matter the region, chances are there’s a mountain within driving (or walking) distance. The country boasts its fair share of mountains—some are even sacred landmarks mentioned in the bible, doubling up your hike as a history lesson.

In the north, the peak of the Galilean mountain (the country’s highest point) swells to almost 4,000 feet. In the south, specifically at the Dead Sea, you’ll reach the lowest on earth at around 1,400 feet below sea level—mere steps from the famous Masada fortress (more on that below).

From its base, Mount Hermon reaches an impressive altitude of 9,292 feet within Syria–just shy of 7,000 feet within Israeli territory, reigning it the tallest mountain in Israel. It stands tall from more than 100km away, meaning on a clear day, you can bet it’s in view.

Historically, Mount Hermon (referred to as Mount Snir and Mount Sion, among other names) was the site of Jesus’ transfiguration and marks the northern border of the Promised Land conquered by Joshua.

Grouped as three mountain peaks in the Anti-Lebanon Mountains between Syria and Lebanon, the snow-capped mountain is a popular seasonal ski resort presenting an assortment of ski slopes for your winter sports fix.

If you prefer to bypass the snow, hit the trails in the warmer seasons where you can hike up to 6,627 feet of Mount Hermon, although taking to the trail requires prior approval from Israel’s military.

Famous as the site of a tenacious battle between Israel and Syria during the Yom Kippur War of 1973, in which against all odds, the Israeli forces were victorious, Mount Bental has rested as a dormant volcano for some thousands of years. Located in the Golan Heights, close to the Syrian border, its elevated reaches over 3,800 feet and a short drive to its peak is met with sweeping views of Syria and the Golan Heights.

It’s also your chance to explore an underground disused IDF bunker, which depicts the story of the Yom Kippur War. Look out for your photo opportunity at the arrowed sign pole displaying the distance and directions of an assortment of cities.

Rising almost 4,000 feet above sea level, Mount Meron is the second largest mountain in Israel, resting in the north. Known as the burial site of Rabbi Shimon Bar Yochai, a 1st-century Jewish Sage, the mountain is flocked by Jewish gatherers during the holiday of Lag B’Omer (typically late April or in early May) to pay tribute.

A visit to Mount Meron and the nature reserve is one for the senses as you roam through lush greenery and forests and thriving wildlife, with a spread of plants for the budding botanists. Plenty of trails to suit all levels will lead you across picturesque scenery towards the peak.

In the tranquil Lower Galilee, Mount Arbel’s sheering slopes tower over the Sea of Galilee. Spattered with dwellings, assembled from naturally occurring caves dating back to the time of the Second Temple, the mountain forms part of the Israel National Trail and also intercepts a section of the Jesus Trail. Throughout the Hellenistic and Roman periods, Mount Arbel saw its fair share of bloody battles.

An ancient fortress reveals itself within the rocks of this rugged cliff, which promises glorious views atop. Adventure seekers will be happy to discover an entanglement of ladders and metal handles throughout, making for a heart-pumping climb and just as dramatic a descent.

Soaked in a breathtaking backdrop, the Mount Carmel mountain range stretches a chunk of Israel’s coastline, rising to 1,791 feet above sea level. As a symbol of sacredness and beauty, Mount Carmel is said to be one of the holiest mountains in Israel, where Elijah’s confrontation with the prophets of Baal took place. For the history buffs, a visit to Stella Maris Monastery, Elijah’s Cave, and the Baha’i Shrine should be on your radar.

Mount Carmel National Park has plenty of hiking trails for all abilities, including the 4.5-mile reserve loop and an easy amble to the striking Cliff Viewpoint and Kelah Stream. A visit to the weekend market at the Druze village of Daliyat El Carmel burrowed high within the mountains, is a unique add-on for your trip.

Mount Gilboa—Gilboa meaning ‘‘boiling springs’ in Hebrew—is located in the Lower Galilee amongst a serene expanse for exploring on a breezy day. Back in 1183, a battle took place involving the army of the Crusader Kingdom of Jerusalem and Sultan Saladin. Then again in 1260, Mount Gilboa was the site of another battle, this time the Battle of Ain Jalut, won by the Bahri Mamluks of Egypt against the invasion of the Mongol Empire.

Today, the area is sprinkled with some 170 plant species and is home to the Gilboa Nature Reserve, where you can find the striking Gilboa iris trail. The luscious area features a 15km trail across a diverse tapestry of peaks and valleys alongside other challenging routes through sumptuous nature.

Mount Tabor, a 1,900-foot mountain in Lower Galilee, lies at the eastern end of the Jezreel Valley. The area is of religious significance in both Judaism—where the 1799 Battle of Mount Tabor took place between the Israelites and Canaanites—and Christianity, as the site of the Transfiguration of Jesus. Pilgrimages have taken place there since the 4th century, partly to visit its monasteries at its height. There are three main hiking trails that offer panoramic views atop and stunning walks through the surrounding luscious woodlands, making this an ideal region for nature lovers.

Although technically an ancient 2,000-year-old Herodian fortress, Masada is one to include on your mountains in Israel list. The UNESCO World Heritage Centre, rising at the edge of the Judean Desert, directly overlooks the entirety of the Dead Sea central belt as a 1,300-foot colossal symbol of strength.

Whether you hop on the cable car, have a quick jaunt up the Roman Ramp and wind your way up the 2.7km Snake Path. Alternatively you can take on the 3.7km Runner Path, the view at the top will not disappoint. Head there before sunrise to witness the region awaken from its slumber before your very eyes.

Take Abraham’s Masada & Dead Sea Tours departing from Tel Aviv and Jerusalem to discover the area in depth, including a sunrise tour and a dip in the Dead Sea! 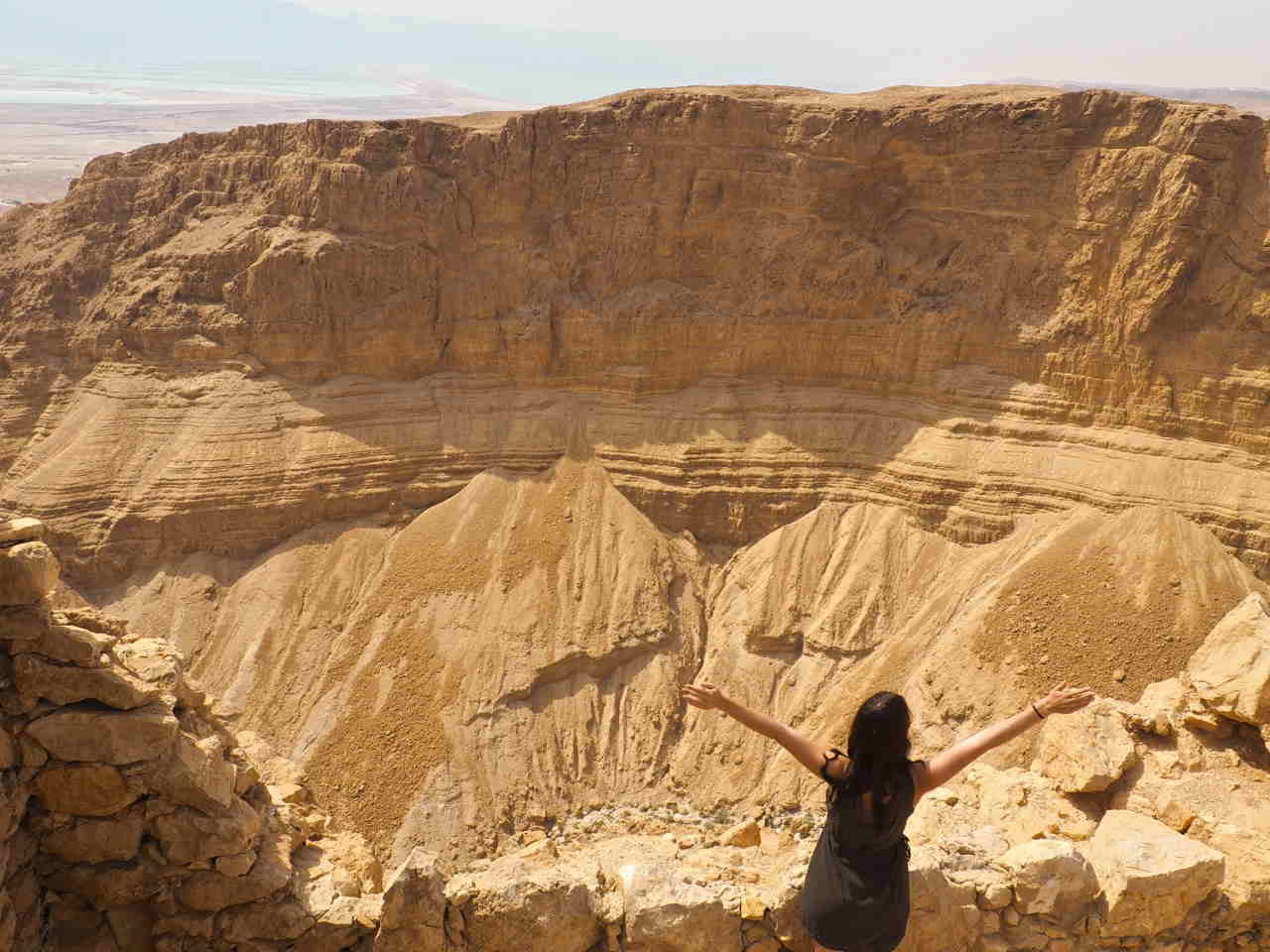 Said to be the longest salt cave in the world, Mount Sodom is comprised of around 80% salt and stands at 720 feet tall. Although referred to as a hill, Mount Sodom is also known as a mountain in Israel, resting within the Judean Desert Nature Reserve. Dating back hundreds of thousands of years, it’s also the setting of the story of the sinful cities of Sodom and Gomorrah from the book of Genesis.

The narrow entrance to the salt cave is steps from the Dead Sea, or for those who dare, buckle up and abseil down the 80-meter natural salt chimney. If you opt to hike to the top, be prepared for a steep descent down a series of steps and ladders.

Eilat, renowned for its thrilling diving spots, offers other adventuresome activities for the curious explorer. Tzfahot, the Hebrew name for Schist, from which the entire mountain grows, is an exquisite hike through desert terrain. Located in Eilat and rising close to 1,000 feet, this rocky climb guarantees a first-rate viewpoint of the Gulf of Aqaba—Israel, Jordan, Egypt, and Saudi Arabia.

Marked by a few easy-to-follow trails, the 4km circular route takes around 2-3 hours. It’s also both the start and end point of the Israel National Trail. However, this gem of a mountain in Israel is frequented by fewer hikers than you might expect, partly due to the year-round soaring desert temperatures. To avoid the scalding heat, embark on your climb early–ideally before sunrise.